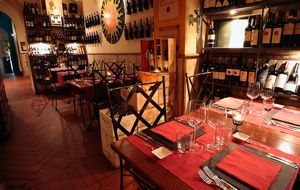 Perhaps few restaurants are more suitably named than Ad Hoc, with each of its myriad attractions seemingly designed and delivered for a single bespoke purpose.

The restaurant’s layout, for example, is both unusual and versatile. Two small dining rooms are complemented by the ‘Green Room’ – which is also available for private parties and functions – and a midnight blue, cream leather-bedecked booth, which is even endowed with curtains should you wish to shut out the passing traffic of envious diners.

No sooner had we been shepherded into said booth than were we presented with prosecco (served in a custom-built glass holder resembling a converted candlestick), a couple of menus and a quite bewildering list of specialities. Heads spinning, we sought refuge in the standard menu, which offered about the right range of choice – four or five options each of meat and fish based antipasti, primi and secondi.

To kick off, we plumped for the reasonably priced seafood antipasto for two (antipasti €10 – €17) expecting to share across the table. What actually arrived appeared to be more like a seafood antipasto for two each, with another innovatively designed crock dividing the huge serving into individual portions of Sicilian calamaretti, a tissue-paper delicate carpaccio of seabass, wedges of smoked red tuna, a smoked salmon salad and, best of all, deep fried courgette flowers filled with buffalo ricotta and anchovies. Despite the almost overwhelming size of the platters we made short work of this pleasing range of textures and tastes. A similar smorgasbord is available in both meat and cheese versions and, if the fish is anything to go by, are definitely recommended as an almost perfect beginning to the meal.

Charmingly, you can also order these ‘taster platters’ for all courses, although we opted to get a more in depth look at a couple of the Ad Hoc specialities – filled pasta (€10 – €15), whose usual weightiness had us worried having demolished the contents of an aquarium just minutes before. However, the portioning here was right on the money with a small stack of king-size ravioli in the middle of the plate. Mine were packed with speck and fontina and smothered in butter, sage and parmesan and my companion’s with grana padano, ricotta and nuts with pachino tomatoes and basil. In both cases the pasta was cooked to perfection and each forkful fit to burst with the flavour of the fresh, hand-picked and seasonal ingredients our highly-attentive hostess had assured us were the norm.

Next up were the secondi (€14 – €20), with a spectacular slow-cooked duck leg in black truffle sauce served with a blob of basmati rice for me and a tender, oven-baked swordfish with mushrooms topped with courgette slices being devoured across the table. The duck meat required almost no coaxing from the bone and although the combination with the truffle sauce was almost overwhelmingly rich, the basmati rice evened out the flavours nicely. The fish meanwhile was apparently beautifully delicate.

We followed the hostess’s advice and washed down the meal with an excellent bottle of Chalanchi di Vaiano chardonnay from the restaurant’s capacious wine cellar, much of which is said to be sourced with great care and attention from almost unknown artisan winemakers. We didn’t get a second look at the wine list unfortunately, but the chance to sample a couple more of these artisan wines would be a reason to return in itself, almost regardless of price.

We couldn’t even begin to think about cheese or dessert and with the usual Italian selection on offer that seems unlikely to have been any great loss. Instead we knocked back a couple of espressi and a nibbled on a few of grandma’s homemade biscuits before emerging quite sated into the sticky Roman evening for a well-earned (and much-needed) passeggiata. We’ll be back though.