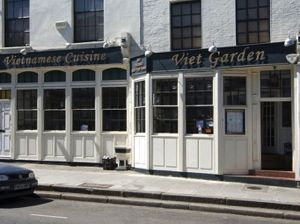 The word on the street is that Chinese is dead; and Thai ain’t looking so hot either. The new pretenders to the throne are Korean, which has recently starburst onto the London scene; and Vietnamese, which has always been quietly mooching around – usually a few noodle dishes tacked on to the end of a Chinese takeout menu. However, the Viet Garden on increasingly upmarket and gastronomically exciting Liverpool Road is one of those now heading up the revolution. Owned by the same family who had Viet Hoa in Dalston, it’s now a buzzing neighbourhood joint, although, curiously, without a garden.

It being a Friday evening, the buzzing continued unabated, rising to a frenetic crescendo at times, such was the liveliness of the punters, their chilli intake and those endorphin levels. The menu is long, but comprehensibly, divided into starters (around the £4 mark), noodle and non-noodle soups, non-soup noodles, salads and then protein divisions (mostly £7 – £9), including fish, squid and prawn, beef, pork, etc – you get the idea. Sounds complicated, but it’s not.

We plunged straight in with summer rolls, beef wrapped in betel leaves, and salted squid, having argued the merits of (and sadly decided against) a bowl of pho, that life-giving soup intrinsic to Vietnamese cuisine and culture. Summer rolls were light and fresh as a daisy, filled with crisp shredded vegetables and prawns, with a heady peanutty dipping sauce. The squid was more than the sum of its parts: meaty, slightly resilient pieces of lightly battered squid scattered with nibs and quills of spring onions and chillis to fire it right up. Beef in betel leaves proved to be darkly caramel-tasting seared beef wrapped in what looked like pink spinach, with a punchy end note.

Ploughing on: reasonably rare flash-fried cubes of Shaking beef, with a lightly astringent green salad; mega-prawns in chilli and lemongrass butterflied open to reveal fabulous sweet tender flesh in a tangy, zippily spicy sauce, soaked up by copious quantities of sticky steamed rice. Bun thit nuong, as unpronounceable as it was delicious, turned out to be a sizzling platter of spiced pork with more faintly vinegary noodles and crisp vegetables to lift and refresh.

The wine list is short, but sensible, with well-judged choices such as Gewürztraminer, for example, and very – maybe too reasonably – priced at £15 (house white is a positively skeletal £10). Service is friendly and slightly incredulously accommodating – ‘Not another bottle of wine?’ ‘Erm, yes please’ – if a little stretched at full capacity. Dinner for three, including wine, came to £75.

Obviously, the dire standard of Oriental cuisine in the capital has been hauled up by its bootstraps since the emergence of Alan Yau, and others of his ilk. But the morbidity of your average high street Chinese seems a curious option, when there is a perky Vietnamese alternative available. Vive la Revolution!