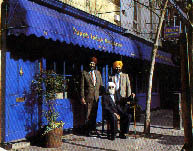 A Sikh family establishment, the restaurant has occupied its Covent Garden premises for over half a century and there’s been only the most cursory of concessions towards changing fashions. Downstairs the walls are all yellow silk and glossy black wood, a few limp sprigs of tinsel thrown up for Christmas, but the décor is beside the point at an establishment that prides itself on dishes such as “Granddad’s Special Kali Daal”.

The food was of a uniformly high standard for this kind of restaurant. Of the starters, vegetable samosas were plump and flavourful, and pakora – onions cooked in chickpea batter – were crispy and light. Main courses were equally satisfying, fresh tasting and not swamped in heavy chemical-tinted sauces.

As you would expect with a good Indian restaurant there was an excellent selection of vegetable dishes. Baigan, an aubergine dish, was lightly spiced and tasty. We also chose Tinda Masala, an excellent pumpkin dish and Channa Aloo, a dish of chickpeas and potatoes, and were more than happy with both decisions.

The menu also boasted a strong range of meat and seafood dishes, featuring expected favourites and regional chef’s specialties like Anari Gosht – pomegranate flavoured lamb – and Acchari Murgha, a dish of pickled chicken. Service was of the old fashioned variety but remained reliable and friendly throughout our meal.

Those curry house staples, papadums, were also available – with the usual selection of pickles – as were a large range of breads, from plain naan to the keema and peshwarivarities, none priced over £3. The only downside to such refreshing prices is that you may let your Londoner’s guard down and order far more than you really need or want as a result.

As for drinks, not being beer people we looked to the small but adequate wine list from which we selected an enjoyable bottle of red. Later in the evening when we called for a second bottle we found they had run out, but we were offered a no less plesant alternative.

This is not destination dining but that really didn’t matter. The prices, as has been pointed out, are exceptionally reasonable for such a centrally located restaurant: the starters hover around the £3 mark and few main dishes top £10. Defiantly unflashy, The Punjab provides great value and a warm atmosphere on the borders of Theatreland.