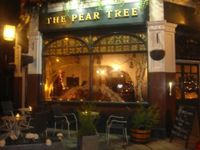 Finally, we found it. Nestled on a quiet residential street between Charing Cross Hospital and the Queen’s Club, the building sits unassumingly on a street junction, painted green panels and THE PEAR TREE in gold lettering across the entrance. Inside a dozen locals chewed the bar where two young girls stood carefully increasing the girth of their pulling arm and smiling happily to the drinkers.

We sat down in a corner – inside has a warming, polished wood, Cotswold feel – and as I leaned back the brace of my chair broke, snapping away from its support as I settled myself (and I’m average weight, or so I tell myself).

The menus are split across three blackboards, each occupying their own corner of the room. What’s on display is limited but interesting. Steering clear of standard traditional pub grub, there was lamb with cannelloni beans and a Ribeye steak with pan fried gnocchi and Jerusalem artichoke puree, to name a few.

The homemade Scotch egg (£3.75) was a lovely thing: crispy breadcrumbs (two seconds away from burnt) with a plump and runny egg at its center which oozed from its casing. The honey and mustard dressing that accompanied didn’t work and battled between textures: a honey sweetness and sharp mustard tang. I’d have preferred a homemade ketchup or hollandaise sauce.

For my main course I had the grilled mackerel with beetroot and chorizo salad (£11.75). The mackerel was a generous portion and came away easily from the spine; picking little bones from the fleshy meat is always laborious but the texture and taste made up for it. Best of all was the salad: crunchy greens with sanguine flushed beetroot and paprika-coloured, smoky chorizo cubes. My partner had the wild mushroom risotto with pork (£8.75): the risotto was fine but lacked the conventional gooeyness of sticky risotto and the pork was thinly sliced portions laid on top in an unimaginative style, its outer parameters holding fatty deposits.

The food is cooked and served in a relaxed atmosphere and the owner Lulu is on hand, conversing and serving. She is graceful with an easy charm and sits to chat with us. She and ‘Dazzler’ (Darren) took charge of the premises before Christmas and have a second pub in West London. ‘A pub belongs to everybody’ Lulu tells me. ‘Our aim is simple, to produce good food and good service.’

There were only two options for dessert: a rhubarb pana cotta or chocolate cheesecake (£4.25). We opted for the cheesecake, which was disappointingly tasteless. It was cold – perhaps left in the fridge too long – difficult to put a spoon through, and bland. It arrived with a simplistic presentation and a disagreeing sauce. We found it an effort to endure after only one mouthful.

It might seem unjust to compare pub food, harshly, with higher establishments or Michelin starred restaurants, but when you’re bold enough to state on your website that your head chef ‘previously worked in a Michelin star restaurant’, then the food does open itself to criticism. When asked which restaurant this was, I didn’t get a response, only that he has worked previously in Sweden. The pub is, however, inescapably in a greater position than it was a year ago and with the sun making its scanty appearances I’m sure locals will find themselves sipping ciders and wines in the garden, there’ll even be the locals ordering their usual and crunching through bags of peanuts and pork scratchings.

The ambition will no doubt be to please both parties: locals and the influx of new custom. Those who you’ll need in the winter months – buying their beers and crisps – and those who can up the anti in the summer months, ordering lunches and group bottles of wine. It’s an onerous transition from local boozer to gastro pub, but it’s a path along which The Pear Tree is moving steadily.