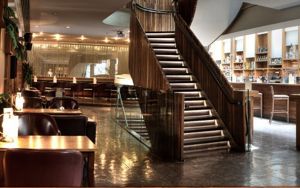 To be perfectly honest, we ended up at The Living Room because Momo was full and as we didn’t have a reservation, the wait would have been at least half an hour. The Italian joint opposite looked suspiciously quiet compared to the other restaurants on Heddon Street for a Friday night, so The Living Room it had to be. That’s not to say it was a bad choice, mind. It just wasn’t our first choice.

But the staff were extremely welcoming and before long, we were comfortably settled at our table with a couple of glasses of wine in front of us, the let-down of not being at Momo evaporating without trace.

The Living Room is a relative newcomer to the Heddon Street scene, but disappointingly formulaic in its offering. The décor is pared down wood – blocky wooden tables and chairs on polished wood flooring against wood panelled walls. Think All Bar One with a little more class, but little more character. There’s nothing to dislike, but wooden everything is, well, just that: wooden.

The menu is similarly predictable: a section called ‘Home Comforts’ for the likes of bangers and mash, steak and ale pie and battered cod and chips; main courses of roast cod, seared tuna and fillet steak; sandwiches such as steak or BLT and salads of the Caesar or grilled goat’s cheese variety (£9 – £22.50). Just like the décor – eminently safe, but rather unexciting, almost lazy, as though little thought had gone into putting together an appealing range of dishes.

But for all my gripes, I must admit that I enjoyed my meal. The roast rump of lamb (£15.50) came just as I had requested, a tender medium rare, moist, well-flavoured and nicely accompanied by roasted garlic and wilted spinach, in a portion that looked marginally too small on the plate, but turned out to be perfectly judged. My companion fared less well with her duck hot pot with red cabbage (£10), the potato to duck ratio weighted a little too heavily towards the former. Plus, the waiter hadn’t advised her of this when she’d asked for a side order of mashed potato, so she ended up donating most of the mash to me.

We gave desserts a miss, passing up on the likes of chocolate brownie, sticky toffee pudding and rice pudding (£4.50 – £5.50) to linger instead over a couple of glasses of wine. At no time were we pressured to leave, and with the pleasant but unobtrusive live piano music in the background, we were surprised at how late it was when we finally asked for the bill.

It was with mixed feelings that I left The Living Room. I had, despite myself, enjoyed the meal. What I had thought was standard ‘gastrobar’ fare turned out to be competently executed; the unimaginative décor also passed for pleasant ambiance; and the prices, though a touch high for what it was, weren’t unreasonable or prohibitive. Given my time again, I’d approach The Living Room in exactly the same way – while not a bad choice, it wouldn’t be my first choice either.