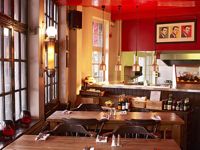 As owner of Le Café Anglais no less, Charlie McVeigh has an impressive pedigree when it comes to restaurants. The Westbridge in Battersea brought him similar kudos in the pub world and its success has spurred him on to expand the concept. Rebranded as The Draft House, McVeigh’s Battersea boozer has been joined by another in Clapham and he’s already on the lookout for site number three, possibly at Tower Bridge or else somewhere in West London.

It’s the pubs’ philosophy which makes them stand out from the crowd. They’re about exploring the varied offerings of the beer world, supporting microbreweries that are young (as opposed to Young’s), local, particularly different, or just create a knock-out brew. The pubs are bought as leasehold only, which crucially means they can serve any drinks they like without being tied to one particular brewer or distributor – a rarity these days.

The big news when Clapham’s Draft House opened was that it was to become the first pub to serve thirds. This is a blessing given the extensive beer list which offers so many tempting options. The food is similarly geared towards variety, with a selection of pub classics, and some less common offerings, all served tapas style.

Much like a proper tapas restaurant, you’ll be ordering right through the night. Round one brings a few dishes with a touch of the Mediterranean about them. Squid & chorizo in their liquor, olives & fresh marjoram (£6) is a bit of a mouthful on the menu but an easy to eat, paprika flavoured treat when it arrives. Oh so trendy padron peppers, sea salt (£4.75) are charred to blistering perfection, though sadly there’s not a hot one amongst them. Boquerones, gremolata with crostini (£4.50) are generous on the fish and rewardingly crunchy, but the menu’s description is annoyingly overplayed (by crostini they mean they’re breadcrumbed), and reads like a CSV file. An accompanying trio of thirds takes a local route, with Junction Ale and Wandle Ale, both brewed at Sambrook’s brewery just around the corner, and a slightly more distant offering of Meantime Porter from the Greenwich brewery. The smoky porter and hoppy junction stand out, and at around £4 for the three thirds, they’re not bad value at all.

A top-up dish of ox tongue fritters, horseradish and beetroot (£5.50) steals the show. Intense, iron-heavy meatiness in a crisp batter served with some understandably pink and fiery horseradish and beetroot relish. A third of Rosardo raspberry ale is expensive at £2.35 and would probably be better matched with a more delicate dish, but at least the pink tinges matched. Half a pint of prawns (£2.75) and ham hock terrine (£4.75) follow (these are necessary abbreviations from the menu) and neither can be faulted, though the highlight is the array of pickles that accompany the terrine. A bottle of Ed’s Chilli Beer (£4.25) from America washes them down nicely, and there’s enough spice in there to warrant a glass of water to wash the beer down – a shame it has to be imported, though, when there are very good British chilli beers available.

Having feasted, the menu remains virtually untouched. There are main courses available alongside the small dish options and a selection of desserts, not to mention over fifty more beers and ciders to try. That, to me, is reason enough to return. Or maybe try another branch…