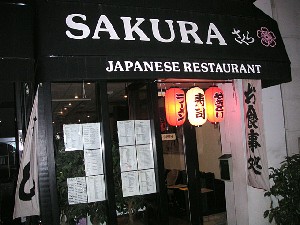 This was supposed to be a review of a certain Korean-restaurant-which-shall-henceforth-never-be-named. However, after being superseded in the queue by several of the manager’s cronies and being manhandled by a passive-aggressive waiter, we wanted out. Plus, the prospect of smelling like Korean barbequed pork during our routine post-meal barhop wasn’t exactly a promising one. We crossed Regent Street and decided on Japanese, since, in the immortal words of Ms Paris Hilton, “All the coolest and best-looking people eat sushi”.

Sakura is renowned for its authenticity. And this authenticity is manifest in every aspect: from the food and the minimalist wooden furnishings to the predominantly Japanese crowd. Admittedly, sharing cramped tables with strangers is de rigueur, and the waiters are constantly buzzing around akin to commuters on a Tokyo subway. Nevertheless, the restaurant is cosy, spotlessly clean and ideal for the occasional group outing.

Despite some horrifying rumours I had previously heard about the wait, we were seated immediately. Contrary once again to hearsay, the service throughout the evening was unimpeachable. The waitresses were all smiles, and endearingly apologetic for virtually nonexistent mishaps.

While not particularly innovative, the menu is by no means limited. A reasonably broad range of sushi and sashimi is available, as well as a plethora of ala carte dishes (including tempura, grilled fish and teriyaki dishes – averaging £7 each) and donburi-mono dishes (stews served on a bed of rice). Set meals are also available at around £20 per head. The shabu shabu(meat and vegetables cooked in a simmering pot of broth) also came highly recommended, but has to be pre-ordered in advance.

I opted for the Assorted Sushi Set (£22), a lavish spread of sushi consisting of tuna, salmon, red snapper, flying fish roe, squid and yellow tail, amongst others. The set was inclusive of an appetiser (an inventive concoction comprising tuna, leeks and peanut sauce), miso soup and a choice of tempura or beef. Everything was top notch, and the sushi in particular was extremely fresh. My friend decided on the “Sakura” set (£18), a bento box containing a generous portion of tempura, sashimi and beef teriyaki. We also ordered several items to share. Particularly notable was the agedofu (£4.50), a refreshing dish comprising slices of fried tofu dipped in soy sauce and sweet sake. On this particular occasion, uni (sea urchin) was also available. As fussy as I ordinarily am about my uni (since sub-par quality sea urchin is virtually inedible), I was pleasantly surprised by its taste and texture on this occasion. The spicy salmon rolls (£3.50), while far from spectacular, were nevertheless appetizing and delicate.

One notable caveat is the fact that there is no proper wine list. House wines aside, the drinks list consists of soft drinks, Japanese beers (Asahi, Sapporo, Kirin) and sake. I was particularly intrigued by the calpico, a Japanese yoghurt drink which tastes better than it looks (although a friend once commented on its resemblance to gastric medication).

All in all, Sakura may not astound the Japanese food connoisseur, but it is definitely worth a visit. In the interests of journalistic integrity, I fully intend to produce an objective review of the aforementioned Korean-restaurant – once my rage has been sublimated (read: never). But in the meantime, I’ll be across the street, picking at my sushi with Ms Hilton and the rest of the glitterati.