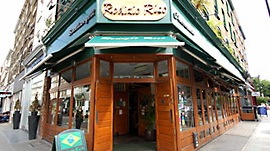 Vegetarians, turn back now – this one’s not for you. The Brazilian churrascaria concept on which Rodizio Rico is based is practically custom designed for meat lovers, particularly the subset that enjoys all meat types in any manner of cut, and even more specifically for those who like big quantities of it.

It’s simple, really. Skewers of meat (ranging from chicken wings, pork and lamb chops, beef steaks etc) are grilled, waiters take the cooked food round to all the tables – wielding it still on the skewers – and deposit it on the plates in front of you. All you have to do is eat. And since you pay a fixed price (about £20 per person, a bit less if you only want the vegetarian salad bar), it makes sense to eat as much as you can. Which is precisely what most people come here to do.

It’s basically barbecue food, except that you can have it any time of year and the work is taken out of it. (I know, barbecues aren’t meant to involve “work”, but try telling that to the person who spends half an hour choking on the smoke as the charcoal briquettes fail to light properly, before standing, sweating, in front of the grill all day while everyone else eats the fruit of their labours, and then has to scrub it clean afterwards…) So, if that’s right up your street, your only complaints might be the oversalty seasoning and the lack of choice in what you get to eat.

Don’t get me wrong when I say “lack of choice”; there is meat galore (though not as much as in a true churrascaria, where you might well be served chicken hearts and gizzards), but if you like barbecued fish / seafood / vegetables, then you’re better off hauling out that barbecue.

The set cost also includes the salad bar, where you can help yourself to raw salad, arroz e feijao (rice and beans), feijoada (black bean stew), farofa (ground cassava meal) and best of all, warm fluffy cheese breads, pao de quiejo. For the vegetarians who made it this far down the review, this is all that’s available to you.

Drinkswise, there are beers, spirits and soft drinks. We had caipirinhas, a mixture of lemon or lime juice, sugar and cachaca (sugarcane liquor). Of the group I went with, reactions to this Brazilian drink were mixed, but I admit that it wasn’t really my cup of tea (to use a completely inappropriate expression). The cost of drinks tends to add up, particularly because the food is quite salty (does the cynic in me detect a link?), so the total cost per head could be more like £30 – £35. Pretty standard by London standards, but I can think of so many more places where I could get better food for that price. What you might not get, though, is the fun atmosphere and the unique (at least in London) dining experience.