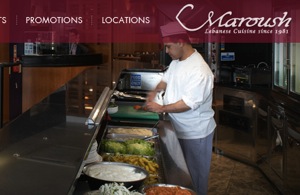 I pride myself on being able to declare (along with the facts that I have only ever eaten at a Burger King once, cannot remember the last time I drank Coke, and the weirdest things I have eaten are armadillo and sand worms – though not at the same time) that I have managed to resist (read “avoid”) the delights (read “dangers”) of kebabs all my life. Even during my university days, when kebab vans were vital landmarks in the student geography and kebabs were staple essay crisis food, or just seemed like a good idea after a night out, I just ate chips and cheese with ketchup instead. Don’t ask, I was a student. Nuff said.

But not any more. I finally succumbed and had my first kebab at the relatively advanced age of 26. (I couldn’t find any surveys showing the average age of people eating their first kebab, but am sure that some PhD student somewhere has been given a sizeable grant to conduct just such a study.) Admittedly, I did dilute the experience somewhat by going to Ranoush Juice, which to all intents and purposes is a high class kebab shop, rather than to a roadside van where food poisoning is a foregone conclusion.

The Bloke convinced me to go and I confess to being pleasantly surprised. The place is spotless and very efficient, and you can watch the food being prepared in the entrance. We tried the shawarma lamb and falafel wraps (both £3.25), the lamb lean and tender, the falafel freshly fried and still crunchy, if a little starchy on the inside. A side order of fatayer (£3.90) was less successful, the spinach stuffing of these triangular pastries a little too sour for our taste.

In fact, we’ve been back since to eat in the “restaurant” itself. This is, in reality, just a few tables at the back of the premises, none seating more than four people. There were five of us, so it was a bit of a squeeze.

The Bloke and his cousin both ordered kebab wraps, one of chicken (£3.25) and the other a mix of chicken and lamb (£3.50), which they agreed made for better late-night fast food than McD’s any day. Soujok (£3.25), spicy sausages fried in butter, lemon and garlic, were ideal for sharing. A warming lentil soup (£3.75) topped with crunchy “croutons” of deep-fried Lebanese bread was excellent, as was the Ranoush roasted lamb (£10.50), which turned out to be a whole lamb shank, the accompanying portion of rice with minced lamb and pine nuts good enough to eat on its own.

The wine list is not very long, and several billed on the menu as being available in half bottles were apparently only offered as a whole bottle or by the glass. In the end, a glass of Lebanese red turned out to be all we could stomach, the astringent aftertaste proof enough of why Lebanon is not a major wine producing region.

Baklava on the house were some of the best I’ve had – light, buttery and bursting with nuts – and we rounded off the meal with a satisfying mint tea brewed with fresh leaves.

Dodgy kebabs? Food poisoning the morning after? You should have gone to Ranoush Juice.