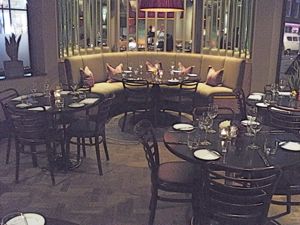 Like many good restaurants, One08 Marylebone Lane is linked to a hotel, The Marylebone Hotel in Welbeck Street, London. With its own separate entrance, yes, you’ve guessed it, at 108 Marylebone Lane, you enter the restaurant through a substantial bar and lounge area.

The restaurant itself is quite spacious, with banquette seating around the sides of the room; although obviously modern, the restaurant, bar and lounge have a kind of retro feel about them with touches that come from the ’60s, ’70s and ’80s but it works, creating a good relaxed atmosphere.

As we sat and chose our meals, some breads with chilli and garlic infused dipping oils were brought to the table for us to pick at, along with glasses of a fruity Sauvignon Blanc we had chosen. We set about the task of deciding what to eat and for starters I went for the scallops, Phillip chose the haddock fishcake. The scallops, three big meaty ones, were perfectly cooked, sweet and tender: they were delightful, and arrived on top of a dish of diced chorizo and beans, the distinctive flavours contrasting with the scallops. The fishcake too had great depth of flavour; all too often fishcakes can taste of little more than potato but the haddock really came through in this one, it was very good indeed. It was accompanied by a nicely poached egg with hollandaise sauce, presented on a bed of wilted spinach, which balanced beautifully with the fishcake.

For main courses, Phillip’s eye was drawn to the 6oz fillet steak and I chose lamb rump, with slow roast shoulder. The steak, served on a board, was perfectly cooked, medium rare. It had a good deep pink colour throughout, was beautifully tender and full of flavour, enhanced by its flame grilling; it was a joy to eat. He chose the green peppercorn sauce to go with the steak which had a tingly bite to it, yet didn’t overpower the steak; a side of good triple cooked chips completed the dish for him. My lamb rump was also cooked medium rare as ordered and like the steak was an excellent piece of meat. It was a nice delicate pink and this too had great flavour. The rump was perched on a dish of chunky carrot, swede and some cabbage, together with the richer flavoured slow roast shoulder, and a very good jus that had real depth. Both of these were hearty excellent dishes. We had a very nice Pinot Noir to accompany our mains which paired very well with both meats.

After a little debate as to whether we should share one dessert, we found there were two on the menu that made deciding impossible. So a little while later out they came; the sachertorte was a good but not overly strong chocolate cake, served with passion fruit coulis together with a nice chocolate sauce and was the first to be demolished. The sticky toffee pudding came with a caramel sauce and clotted cream, that balanced well against the light fluffy pudding in which the flavour of the dates and some of their texture came through nicely. Both were very satisfyingly good.

Service at One08 was great; we were looked after well, despite the restaurant being fairly full while we were there. Starter dishes are in the £6 – £10 range, mains £12 – £28 (the latter for steaks), sides are £3.25. The wine list has a good variety, starting at £19 for the Sauvignon Blanc we had, the Pinot Noir was £28, and a good number are sold by the glass. Our experience at One 08 Marylebone was excellent, we would absolutely go back again.