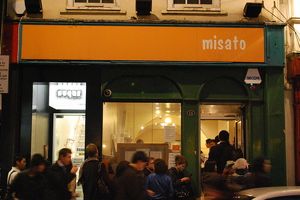 Misato isn’t much to look at – it has an almost canteen-like appearance, with Barbie dolls arranged on the counter (some of them headless). However, the queue, which spills out on to the pavement, would suggest that there is a bit more to it.

The menu offers a nice selection of classic Japanese dishes such as sushi, but the portion sizes are definitely western. We began with a bowl of miso soup (£1) – always a light and satisfying starter (side dishes £1 – £6.50). As the miso begins to settle, it looks rather like there are storm clouds in your bowl.

After that a mixed vegetable and prawn tempura bento (£8.20) came in a large black and red lacquered box with small compartments. The tempura batter kept its crispness very well, but was rather thick – it worked well on the vegetables but stifled the prawns – and the dipping sauce that accompanied it didn’t really taste of much. The box contained other things as well as the tempura, including sushi that contained processed seafood sticks. Although this was disappointing, they were actually very tasty and had a refreshing hint of pickled ginger in them. I was also given seafood noodle salad and a normal salad, rather greasy fried chicken, seafood dumplings, which didn’t taste of much, and an enormous heap of rice.

My partner chose the Teriyaki Salmon with salad (£6.60). His food was served on a green cracked glaze platter and came with another enormous heap of rice. They have an option on the menu for extra rice at £1 but I can’t believe anyone actually goes for it. The salmon portion was also generous and nicely cooked, but the sauce was quite sweet and a little gloopy (main courses £1.70 – £8.60).

Ultimately, the food at Misato is not astounding, but it is satisfying and reasonably priced – a rarity in central London.

One word of warning. After being seated we found out that Misato do not accept debit or credit cards. So my partner had to go on a mad dash round London, trying to find a cash point, while I watched the soup going cold.