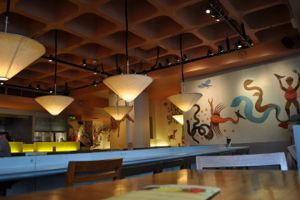 Having found a successful formula at the original Oxford Circus branch, identikit Masala Zones have now been rolled out in Islington and Earl’s Court – the same menus, similar décor and uniformly friendly staff. There’s a lot to be said for consistency, but could this be the beginning of a burgeoning restaurant chain, the ubiquity of which could deter any self-respecting foodie?

Now, I’m the first to admit that I am a restaurant snob – I don’t ‘do’ chains – but there is also irrefutable evidence that I enjoyed my visits to the other two branches of Masala Zone (see reviews on this website). Conclusion? That I am the worst species of restaurant snob: thehypocritical restaurant snob.

And so it was that I found myself at the Islington outpost, having recently returned from a trip to India and suffering from a newly diagnosed malady: curry withdrawal symptoms.

We started with one of my favourites, a reassuringly familiar crunchy bhel salad and tried, at our waiter’s recommendation, gol guppa, crispy shells filled with potato into which a tangy tamarind and coriander sauce is poured, before the whole lot is popped into the mouth in one go – the flavours literally burst around your taste buds.

The thalis are deservedly popular here, and having tried several others from the menu, I opted for the Ayurvedic thali. Designed as a healthier alternative, as well as being suitable for diabetics, there is a choice of a chicken or vegetarian main, accompanied by dal, a couple of vegetables (in my case, courgettes and fenugreek leaves), fresh salad, chapatti and a papadum. The food is undoubtedly lighter than the standard fare, prepared with less oil and consequently fewer calories (though this is compensated for by the generous portions), but a no less flavoursome option.

We also ordered one of the specials, lamb biryani, the grains of basmati rice separate and individually coated with spices, the cubes of lamb tender and well flavoured. In other words, a text book biryani, yet somehow nothing to write home about.

As ever, too full to comfortably manage dessert but unable to pass up the most intriguing ice cream flavour we’d encountered, we finished with the avocado and pistachio ice cream from the specials menu. Unnecessarily topped with luminous streaks of an unidentifiable red sauce, the ‘homemade’ ice cream itself was good: creamy in texture, full of flavour, not too sweet and enhanced by a spicy aftertaste of chilli, cinnamon and cloves. I still think pistachio works better on its own – after all, I’ve yet to see the Italians make avocado gelato, and who are we to argue with the makers of the best ice cream in the world?

All in all, a tasty meal at reasonable prices in a pleasant enough environment, with great service to boot. There’s even a private room for functions and an outdoor seating area to make this an even more appetising venue during the summer. So, what’s not to like? Well, nothing really. But in India, although many restaurants serve the same staples (dal, channamasala, paneer), they taste different depending on the chef’s own recipe, so that you can order exactly the same dishes and have a utterly different meal at each restaurant. Somehow, Masala Zone’s uniformity, consistency, reliability – however you choose to see it – goes against all this. Either that, or it’s just the restaurant snob in me.