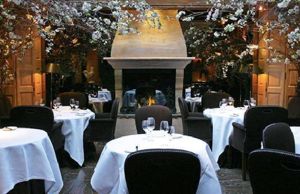 Previous experience has taught us that it would be foolhardy to have high expectations of any restaurant this close to the tourist throb of Covent Garden. Happily Maggiore’s overturns this assumption, providing highly satisfying modern European cuisine a stone’s throw from the main piazza.

With its flagstone flooring and overhead skylight surrounded by climbing branches, the elegant dining room has been styled to resemble an Italianate courtyard. It’s an effect that could have veered dangerously close to the kitsch in less competent hands but, with the aid of intelligent lighting, the space instead feels intimate and welcoming.

The current pre-theatre menu, offering three course for £19.50, is one of the best such deals in the West End with a glass of champagne or a selected cocktail included in the price. Feeling in a cocktail kind of mood we opted for the promised Melon Ball only to be told they were out; not the best start but the offered alternative, a Negroni, rapidly offset any misgivings.

Starters were of a very high standard. An avocado and baby spinach salad was accompanied by sliver thin croutons and a generous amount of crisp bacon; pumpkin soup was smoky and flavourful, enriched by a slick of truffle cream.

Main courses were equally accomplished. Slow braising with garlic and rosemary turned a simple lamb shank into something special: rich yet meltingly tender. Pan roasted cod was equally satisfying if not outstanding, served with mushrooms and an unexpected but welcome helping of spinach. A side order of green beans provided a suitably crisp accompaniment to a meal of considerable quality.

From a brief but intriguing list of desserts we chose a crème brulée, its richness balanced by a sharp passion fruit sorbet, a surprising but wholly successful combination.

Maggiore’s has recently been given a 2004 Wine Spectator award for excellence, a deserved accolade. The wine list is impressively thick (the champagne section alone stretches to 80 entries) and is capable of doing considerable damage to your wallet, though it does boast a good number of reasonably priced options. And there’s a sommelier on hand in case this globe-roaming encyclopedia of bottles proves daunting. In the end we opted for a half-bottle of Nuits St Georges priced at £25, a choice we were more than happy with.

There are plenty of restaurants in London offering similar things to Maggiore’s – high quality modern European cuisine served in sophisticated surroundings – but few do it with such style. The place has a warm, romantic atmosphere that made dining there a real pleasure; the service was friendly and attentive though not overly so, and the attention to detail was agreeably high. This is not an innovative or fashionable restaurant but it’s one of the city centre’s nicest; and though the a la carte menu may set you back a bit (main courses start at £14.50) the three course pre-theatre menu (served between 5 and 7) is one of the best deals going.