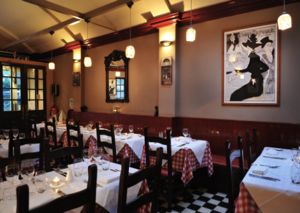 The recently opened Ma Cuisine, located just across the street from Kew Gardens station, marks a return to favour for old-fashioned, unfussy French cooking. There are few frills to what’s on offer, just decent ingredients handled simply and satisfyingly; it’s defiantly untrendy but none the worse for it.

This is the second branch of John McClement’s bistro to open locally: a sister restaurant in Twickenham has been doing good business for a while now and a third is planned. Shunning the highly designed interiors of many of the capital’s eateries, the décor is simple – perhaps too simple, as despite being busy the place lacked atmosphere until the lights were judiciously dimmed. The former post office has been quaintly kitted out with black and white tiled floors and tiffany lampshades but the walls are somewhat bare, and the wipe-down gingham print table cloths, practical though they may be, seem better suited to a greasy spoon than a restaurant of this standard. And the standard is high.

An asparagus salad was served with an excellent hollandaise and a wild mushroom risotto was equally accomplished. Main courses were simpler still, focusing on traditional dishes – a cassoulet of confit duck and Toulouse sausage was cooked to perfection, and wing of skate came with a tasty, tangy caper and lemon butter sauce. The accompanying vegetables, crisp green beans and potatoes dauphinoise were plainly presented but winningly handled. Desserts were equally satisfying: a lemon tart was satisfyingly sharp and the petite but decadent pot au chocolat was definitely one of the highlights of the night.

This was solid unflashy fare; sauces did not overwhelm as they sometimes can do in regional French cooking and the prices are exceptionally reasonable for both the area and the standard of the food on offer. Few starters top the £5 mark and the meat-heavy main courses came in between £10-14. A short but comprehensive all-French wine list has bottles starting at £11.50.

Unfortunately the current menu fails to cater adequately for vegetarians. No main course option was offered and the choice of starters wasn’t much better in this respect; though this is hardly uncommon in provincial France, it is not a policy that will do them any favours in South West London.

Despite this Ma Cuisine has certainly won over the locals. The compact dining area was packed for most of the evening and a definite sense of contentment could be felt from all.