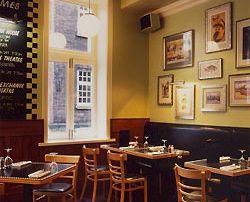 A chain of seafood restaurants with five branches in London and one in each of Leeds and Manchester, Livebait aims to offer “a nirvana for all lovers of seafood”. A cheesy corporate statement this may be, but one glance at the menu and I was already half convinced. Even the décor, with its distinctive check-patterned black and white tiling, has something of a fishmonger’s about it.

The waiter brought us cold prawns, still in their shells, to eat while we looked through the menu, but we had to order bread at £2 per person. Not unreasonable for unlimited bread, baked in-house, and almost what you might label artisanal. With an excellent texture and interesting flavours (sundried tomato, onion, seeded or cinnamon, raisin and walnut), the bread was difficult to resist filling up on, particularly as the waiters kept bringing more each time we finished, as if to ensure you couldn’t accuse them of skimping on bread after making you pay.

We shared a starter (£4 – £15) of honey roasted squid with vegetable tempura and rocket. The squid was tender, but needed a punchier seasoning, and the dish lacked cohesiveness. Squid with rocket? Maybe. Squid with tempura? A possibility. But the three together just didn’t quite pull it off. And before you start thinking that I should have known better from the description, look at some of the alternatives. Clam chowder, sweet potato and artichoke! Scottish scallops, black puddding and mushroom brioche! Seriously, I think I went for the safe option.

Actually, I’m being a tad unfair as there were more innocuous starters, including rock oysters, crab with mayonnaise or Nova Scotia lobster, but it was a cold evening and wanting something hot or cooked involved venturing into the realms of what appeared to be random ingredient selection.

Main courses (£12 – £28) were better thought out on the whole, but still tried a bit too hard. Seafood is best kept simple to prevent the natural flavours being obscured by over-complication. I had grilled zander with mash, baby chicory and mustard dressing – a pleasant piece of fish but memorable for being utterly unmemorable. The Bloke had steamed John Dory with a “potato burger” (I forget what they called it on the menu, but it was a cross between mashed potato and rösti), mushroom tapenade and almond and olive couscous. The individual components were tasty, but should have delivered more than the sum of the parts.

A popular choice, and maybe what we would have chosen if it hadn’t been so cold, were the seafood platters. The shellfish plate (£11.95) is a selection of oysters, prawns, crab and seasonal shellfish; the classic platter (£28.50) features rock oysters, Dorset crab, whelks, cockles, winkles, Atlantic prawns, mussels and Madagascan crevettes, while the Livebait platter weighs in at a hefty £49.50, but includes a whole Dorset crab, whole lobster, Madagascan and Saudi crevettes and Atlantic prawns.

We couldn’t manage dessert (£4.95), but the likes of rhubarb and apple crumble, crème brulée, or warm chocolate fondant with praline anglaise are typical of the offering here. For drinks, the wine list is unsurprisingly strong on the whites, with a fair selection below £20, and a clean tasting crisp white, such as a chenin blanc, always goes down well.

Overall verdict: Livebait is a bit hit and miss. Certainly, as a seafood lover, I wouldn’t describe this as any kind of Nirvana. Maybe we didn’t choose the best dishes, but for the prices charged and in an area where competition is high, Livebait can’t afford to have dud dishes on the menu.