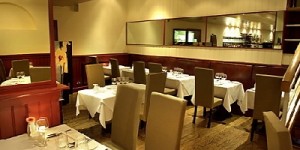 Basement restaurants fill me with dread. Although it’s possible to read the menu outside, try and peer through skylights or loiter to see what kind of patron goes in, there’s no real way of knowing what lurks down the stairs until you get there.

Lanes being a City restaurant I was filled with more dread than usual – would it be deathly quiet or filled with braying City boys flashing the cash to drown their sorrows / celebrate their bonuses depending on the day’s trading?

First impressions and it looked like the latter – it was rammed with Suits all jostling around the bar. There was also a cheesy plasma screen with a flickering fire video.

It was a fight or flight moment but before I had time to do either, we were greeted by the welcoming manager who whisked us off to the more sedate restaurant on the other side on the room.

It’s a pleasant interior with warm chocolate and cream colours, candles and modern art warming what could be an austere space. Here you can enjoy the scrum around the bar from relative safety.

To start, a classic leek & potato soup (£7.50) was given a sophisticated makeover with the addition of smoked salmon. We tried another classic starter – smoked salmon with dill blinis, radish & caviar (£11.50) – it was a generous portion of quality ingredients.

A perfectly cooked fillet of veal came with the most delicious black pudding and caramelised apple Madeira jus (£18.95), and the stuffed rabbit saddle wrapped in pancetta (£17.95) was also divine.

The kitchen, with Simon Conboy (formerly Home House) at the helm, is turning out some top notch dishes, and a crème brulee with baked plum compote (£6.50) rounded off an excellent meal.

There’s a serious wine list – hitting £127 for a Clos de la Roche Grand Cru. We stuck to a Chateau Garreau Bordeaux 2000 at £20.50, seriously good, full of cherry and liquorice flavours.

Lanes has a difficult act to pull off – it has to work as a City boy bar, an informal yet grown-up restaurant, even a private party destination (there was a poker night – not real money, the manager was quick to point out – taking place in the curtained-off back room). But somehow, in the hands of former Marco Pierre White restaurant managers James Robertson and Hamish Smith, it works.

As we left, there was a couple reading the menu outside and trying to peer in. Should we tip them off about what lies with in? Nah. Sometimes a little curiosity pays dividends.

Sakura
The Hand And Flowers, Marlow