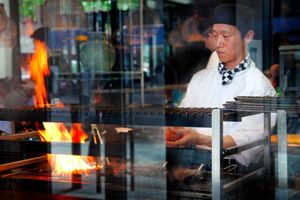 Kimchee opened in High Holborn quite recently and seems to have taken the London dining scene by storm with its authentic Korean cuisine. This cavernous restaurant is set out on two levels.  It has solid dark wood bench seating in the dining area which gives it a kind of up market cafeteria style.  This is added to by the open kitchen that runs the length of the restaurant on its entrance floor.  It’s remarkably popular: we were there on a Wednesday early in February and it was full of bustle; no sooner had tables cleared than they were immediately re-set and re-occupied.  But despite the bustle and the uniformity of its seating it’s a comfortable place in which to spend time.

When seated, we were told that dishes we ordered would come to the table in the order in which they were ready and to be fair, the menu, which is quite extensive, doesn’t have ‘starters’ as such, but a range of side dishes and of more substantial main dishes.  There’s also a short list of accompaniments. We ordered the Kimchee, the dish the restaurant’s named after, from the accompaniments list, together with Yuk Hwae, and Crab Tuigim, each from the side dish section of the menu,.  We thought these would act as starters and would give us time to look through the rest of the menu.

The dishes started arriving, the Kimchee first: essentially layers of pickled cabbage that had good texture and were well flavoured with chilli and a hint of garlic, coming together in the pickling juices to give the dish some nice bite.  The Yuk Hwae is a raw beef dish, described as a little like beef tartare, and it is.  The strands of beef, which were really tender, were piled on some julienne pear and shredded chilli with an egg yolk nestling on top and a dish of chilli sauce on the side.  We were told that we needed to pour the sauce over the creation, then break the egg yolk and mix the whole thing together to coat everything in the yolk and sauce.  It worked remarkably well, and the flavours came together beautifully.  The Crab Tuigim, soft shell crab deep fried in panko breadcrumbs, had a nicely crunchy exterior, encasing the delicately flavoured crab.  It’s a very good dish supported really well by a sweet plum dipping sauce.

Having got through the first three dishes, we ordered a further three, Chicken Dolsot Bibimbap, Pork Bulgogi and the beef tongue skewer (once we saw it on the menu we had to have it).  The Bibimbap is an interesting dish.  Cooked sticky rice is put into the bottom of a searingly hot earthenware dish and the other ingredients including cooked vegetables and the meat of your choice are then layered on top; a raw egg yolk is placed on top of those and you’re given a dish of red chilli paste to tip into it.  You then stir it all together before eating.  It had some really good flavour, the raw egg combined with the sticky rice to bind the whole thing together and as the mixture sat in the dish the rice became crispy giving it a great texture.  The pork Bulgogi was very tasty indeed, with tender slices of the meat in a sauce that had spicy tang, sweetness and a bit of heat.  It was served with a some sticky rice, lettuce leaves and a small dish of red chilli sauce.  The idea is that you use the leaves to make wraps with the other ingredients: we loved them.  The final selection, the beef tongue, well, I don’t know why I was surprised, but it does have an incredibly beefy flavour, thinly sliced and then charcoal grilled the meat had quite a firm texture and required some work in the mouth, but it was worth it – I would recommend anyone to try it.  With the three meat dishes we also had some chargrilled broccoli, which was lovely and al dente, chargrilled portobello mushroom that came drizzled with the chef’s wasabi sauce, which just had some slight heat, and chargrilled asparagus, again nicely al dente, in a good barbecue sauce.  These were an interesting mix of dishes and we enjoyed all of them.

The dessert menu is mainly ice cream, but also has a chocolate and rice cake dish to which we were drawn.  They’re basically glutinous rice balls with chocolate custard filling and dusted with cocoa powder; they were very pleasant.

With the meal we had a small bottle of Soju, a traditional Korean drink like saki, which has a sweetness to it which grows as it warms: at £10.50 it’s worth trying.  There are also a range of wines, starting at £18 a bottle, plus beers and cocktails. Accompaniments at Kimchee average around the £2 mark, sides in the £4 to £5 range and the more substantial dishes are mostly £7 to £8.  Service at Kimchee is busy, but effective and the staff are very helpful.  We enjoyed the meal and would be very happy to go back.