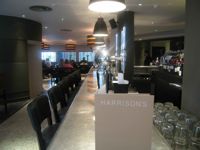 Harrison’s is one of two London restaurants jointly owned by Sam Harrison and Rick Stein. Just a five minute walk from Balham Station, Harrison’s is set back some 20 yards from the High Road, on the corner of Bedford Hill and Harbers Road.  Harrison’s occupies an interesting space; as you enter, the bar and open kitchen dominate taking up the centre of the main floor of Harrison’s, further back there’s a sizeable, comfortable dining space.  There’s also a discreet, elevated area to the rear, that’s ideal for private functions, as well as two substantial basement rooms, each with separate access and their own bars.  We were seated by the open kitchen, which has a kind of American diner feel about it and despite being just a few yards from where all the cooking takes place their extraction system is very effective and hardly any cooking smells escape from the kitchen area.

We kicked off the evening at Harrison’s with a glass of Caves du Haut Poitou Sauvignon Blanc, to drink as we chose our meal and to accompany starters, it had good fruit and some nice acidity, pairing well with the starters we chose.  Phillip had the celeriac & green olive salad, black radish, pecorino with a shallot dressing and I chose the deep fried squid with Cajun aioli.  Philllip’s salad had a good freshness with diced, lightly roasted, celeriac giving good fresh flavour and contrasting well with the green olive; the pecorino added a nice salty cheesy bite and the ribbons of radish just a slight pepperiness, it was brought together well by a good shallot dressing.   If there was one slight criticism, it would be that the balance between green olives and celeriac could have been better, but it was, nevertheless a good and tasty plate of food.  My squid and aioli was a simple dish but executed really well, the rings of squid cooked perfectly, just a little al dente initially, turning softly creamy as you chewed, its crumbly breadcrumb coating provided a great vehicle to pick up the aioli which had some very nice smoky chilli heat, giving a slight tingle on the tongue.

Mains for me was the roast cod with Jersey Royals, purple sprouting broccoli and herb sauce.  Served as a stack, the cod had a well seasoned crispy skin and was beautifully cooked, moist and flaky with just a hint of translucence to it.  It was sat upon some lightly crushed new potatoes, and the broccoli on a pool of thick herby sauce in which parsley dominated.  This was a good delicate dish in which the flavour of the fish was complimented by the other ingredients rather than being overtaken by any of them.  Phillip’s rib eye steak was cooked medium rare as ordered, perfectly pink and juicy.  This good sized cut of meat was accompanied well by some great, lightly seasoned chips and a peppercorn sauce that had a meatiness, as well as its peppery bite that worked well with both the steak and the chips.  With these we shared a side of green beans and almonds in which the beans were nicely al dente with a light buttery coating, the slivers of toasted almonds gave them a great contrast both of flavour and texture.  They went really well with both dishes.  With our mains we had a bottle of Sol y Sombra 2009, a Chilean Pinot Noir, which was light enough to work with the cod, yet gave good support to the steak with its soft red fruitiness and light acidity.

For desserts the rhubarb and lavender crumble was a no-brainer for Phillip; cooked individually it had a good crunchy crumble topping and some great acidic bite from the rhubarb, just lifted slightly by the lavender, it came with a jug of great custard.  I similarly could choose nothing else having seen the chocolate fondant on the menu, and this was a serious one: big full flavoured chocolate, it had a good ooze as it was cut into and was rich and gooey.  The fondant was supported really well by a scoop of excellent black cherry ice cream that had a bright acidic fruit flavour, and was the perfect foil for the rich chocolate confection.

Harrison’s, like its sister restaurant Sam’s Brasserie in Chiswick, has a menu that develops and changes a little most days so it reacts to whatever happens to be seasonal, which means that regulars will always have one or two new dishes to choose from.  They have a wine list ranging upward from £16 for the house red and white, with a good selection by the glass.  Starters range between £5.50 and £9.50 and mains from £9.50 to £20.50.  Service is relaxed, friendly and efficient yet leaving you space.  We greatly enjoyed our meal at Harrison’s, with excellent food and good wines, it’s certainly worth seeking out, I would happily recommend this brasserie and bar to anyone.