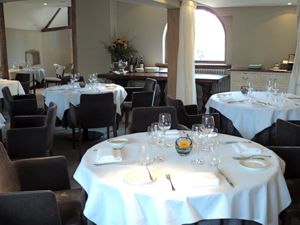 Drake’s, set back a little from the High Street in the village of Ripley, is about 4 miles from the centre of Woking.  On approach you could easily think this Michelin starred restaurant, with its discreet signage, was a double fronted house set among a row of shops.  With its address I was expecting a clock to dominate the building, and yes, there is one centred above the entrance, but again, it’s discreet and I had to look for it.  As you walk into Drake’s there’s a small comfortable bar to your right, to the left is the dining room entrance.  The restaurant is deceptively large and beautifully set out, the recently refurbished decor refined and subtle, creating a great relaxed atmosphere.

We were there at lunchtime and chose the six course tasting menu which at £50 seemed a remarkably good deal.  We also went with a suggestion of paired wines, as we had no idea what dishes we would be eating, having simply been asked if there was anything we didn’t or couldn’t eat.  A ‘truffle explosion’ amuse bouche arrived at the table soon after we were seated with chef Steve Drake’s recommendation that it be eaten in one go, and it was an amazingly tasty mouthful, a ravioli with shaved truffle and a drizzle of olive oil on top.  The little pasta parcel burst to fill your mouth with truffle flavour as you bit into it.

Our first course was quail with rhubarb sweetcorn and foie gras, the quail perfectly cooked with lovely pinkness and delightfully tender.  It came with a good sized tranche of foie gras decorated with a thin strip of dehydrated rhubarb accompanied by some thinly shaved raw broccoli and a good rhubarb reduction. This was a great dish, completed by a glass of a warm sweetcorn custard-like drink, which we were recommended to leave until we had finished the plate of food – it was lovely.  Next came red mullet on a pearl barley pudding with spring onion and mushroom. The fish was cooked beautifully, the fillet had some lovely caramelisation on its skin and the flesh was firm, yet sweet, flaky and moist.  It sat on top of the pearl barley pudding which itself had good flavour from some finely chopped truffle within. There was some cooked spring onion on the side, as well as emulsified black garlic which gave the dish great contrast.

The third tasting plate arrived, scallop with sea buckthorn, sweet potato and chorizo, which was excellent, with just enough finely chopped chorizo to give a hint of flavour yet not overtake the lovely sweet scallop. The buckthorn and the sweet potato gave some depth and balance to the dish.  Our fourth dish was lamb with pomegranate, chicory, courgette and cashew, it was another brilliant creation of tender, delicate pink loin together with slow roast shoulder that had a richness and great depth.  The dish had a scattering of pomegranate with nicely al dente courgette topped with a great cashew and cumin seed brittle.  All these elements came together exceptionally well.  I’m not a lover of the bitterness of chicory and would quite happily have left this out, but did nevertheless eat it.

Before our two dessert courses, there was a pre-dessert of goats cheese ice cream served with cooked fig and drizzled with balsamic glaze, which we both loved.  Then along came the banana passion fruit, pistachio and black olive, a trio of three bite sized chunks, banana with a brûléed sugar crust, pistachio cake and a banana ice cream with finely chopped black olive. All three were divine, and supported well by an intense passion fruit coulis dotted alongside. The final dessert, parsnip ice cream with blackberry compote, yoghurt, and sorrel granite was excellent, the fresh grassiness of the sorrel granite breaking through the rich sweetness of the parsnip ice cream.  It was accompanied by a great blackberry tube filled with some sweet but tart yoghurt.

Drake’s has an extensive wine list: the paired wines their sommelier chose for us included a lovely biodynamic Beaujolais, an Albarino and a Spanish Cabernet sauvignon/tempranillo with the starter and mains selections.  Maury, Mas Amiel and Alain Thienot Brut NV Champagne were paired with the dessert courses.  The wines were all great choices and at £35 per person for four paired wines it’s a good thing to do.  Service was first class, much as you’d expect from a Michelin starred restaurant, both friendly and attentive, ensuring that our experience was as good as it could possibly be.

Chef and owner Steve Drake is creating marvellous food at Drake’s.  It’s a must to visit, well worth going out of your way to find.  I would wholeheartedly recommend it to anyone, it was a divine experience.  It’s quite easy to see why Drake’s was awarded its Michelin star eight years ago and has retained it ever since.