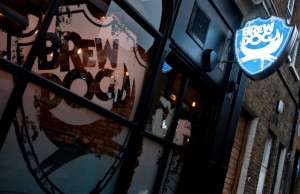 BrewDog is primarily associated with beer, so you don’t necessarily think of food. But the innovative brewers from Aberdeen have brought their molecular genius to the streets of Camden, with a little help from their Masterchef friend.

BrewDog is mainly a bar that serves interesting tasting beer made by their fair hands. It’s not on the main drag of Camden High Street, but head towards The World’s End Pub, go behind and you’ll find the enticing neon blue BrewDog sign. The street level bar is vibrant and busy, whereas the downstairs one is more chilled and relaxed with comfier seating. Depending on how you’re feeling, the bars will cater for all moods.

Their most popular beer (and their first brew) is called Punk IPA, which comes in a bottle or on draft. BrewDog like to educate their customers on how to taste and discover their beer, so they have specially designed glasses that keeps the aromas in. To taste, simply do as you would with wine, have a swirl and a sniff and see what you can find. Punk IPA is their starter beer and is introduced to customers who claim not to like beer as it has similarities to Sauvignon Blanc, because of its tropical fruit scent.

Other beers in their repertoire include 5am Saint, a hoppy, American style brew. The citrus and lychee tastes are different and the flavour smacks you, but in a good way. However if you really want something quite hardcore then the Tactical Nuclear Penguin might be up your street. Served only in shots, as it is 32%, for £6 a pop, it is a truly remarkable beer which is thicker and more syrupy than typical beers and has a tendency towards sherry.

Now down to the food. Designed by Masterchef winner Tim Anderson, his approach to the menu is rather different than your typical pub grub. Consisting of pizzas and burgers, these aren’t your normal run of the mill deal, they are exquisite. The pizzas, all at £9.95, come in three varieties; The Santa Ana, The Eagle Rock (the veggie option) and The Williamsburg (the meat lovers one), all named after places the makers of BrewDog have visited. The Santa Ana is an inspired creation: it’s essentially a nacho style pizza. Presented on a huge wooden board, the thin based pizza is crispy and packed with fantastic toppings; avocado, sour cream, hot jalapenos, chorizo and sweetcorn. The presence of the sour cream calms down the heat of the jalapenos and goes ever so well with their beers.

If you’re not a fan of pizza, fortunately their burgers are epic and are priced between £4.95 – £6.95. The Whitechapel (£5.95) is the best one to try as it is a curry burger. The patty itself is really juicy and gorgeously aromatic and having the combination of mint mayo and spicy chutney is a pleasure on all senses. The thick cheddar dripping from the burger completes it, but be careful as it is a very messy confection to behold. Soon the bar will be doing beer matchings for their food, which will make the experience even more enjoyable.

BrewDog are onto a winner here. They provide a solace for dedicated beer drinkers and introduce dubious ambivalent beer drinkers to the wonders of their brand. When they start to do food matching, it will open up the possibility of people who wouldn’t ordinarily go to a beer bar. These boys are certainly clever – who knows what they will do next…