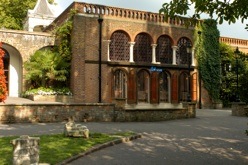 This restaurant has one of the most fantastic locations in London. You can tell just from the address – situated in Holland Park, probably one of the most charming green spaces in central London, the building dates back to the 17th century, when it was the summer ballroom to Holland House, a Jacobean mansion. And in my view, having eaten here at various points in the year, the place is at its best in summer, particularly if you can secure a terrace table on a sunny day.

The décor bears several hallmarks of the Marco Pierre White empire, from the mirrored “screens” in the entrance to the beautiful, almost disproportionately large, flower arrangements, but is more muted in comparison with the overt flamboyance of The Criterion, the intimacy of L’Escargot or the movie star glamour of Mirabelle. You might even get to see MPW himself, not quite blending into the surroundings with his trademark hat, as we did one summer afternoon.

The à la carte menu is wonderfully French and luxury ingredients abound, whether it be a smooth, unctuous parfait of fois gras with poilane toast, new season asparagus with a rich hollandaise sauce, or a plate of gleaming oysters. Even the smoked salmon (described as being “properly garnished”) was a revelation: lustrous slices of fish with neat little piles of shaved egg white, hard-boiled egg yolks (separately), capers, lemon and various other bits and pieces. Basically, I’ve been eating this wrong the whole time…

There is a separate menu for Sunday lunch more reminiscent of a traditional English Sunday lunch. Main courses might include a roast (portions of golden, crisp skinned chicken; slices of tender beef) with all the trimmings (crunchy roast potatoes slightly burnt round the edges; buttered baby carrots; brussel sprouts), while desserts tend towards the heavier end of the spectrum (rice pudding; bread-and-butter pudding; fruit crumble with custard). The sort of lunch that sounds almost ordinary, but is cooked so well it becomes instantly memorable.

Food of this quality doesn’t come cheap, but there are some good value set menu options. And while a bottle from the top end of the wine list could instantly triple your bill, there is a reasonable range around or under the more affordable £30 mark, including some interesting new world wines (I didn’t know Lebanon produced wine!). Some nice dessert wines for rounding off a meal too; on our last visit, the sommelier recommended a particularly nice Sauternes of which I should have taken the details. Oh well, I’ll just have to go back for another meal to ask…