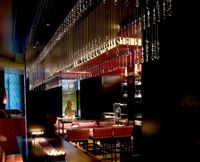 Amaya doesn’t only come with an impressive reputation (and a Michelin star) based on its own merits, but also one based on that of its sister outlets. It’s from the team behind well-established high-end Indian eateries Veeraswamy and Chutney Mary. The group also boasts the growing Masala Zone brand, which may operate at a much lower price point but has recently received lashings of praise from critics such as Fay Maschler, who last year chose to celebrate her birthday in the Bayswater branch.

Clearly the owners know a thing or two about Indian food, then. But Amaya is anything but your standard Indian restaurant – even by fine dining standards. Here the focus is almost solely on Indian grills, cooked in the open before diners’ eyes. Given this focus, it’s surprising that the grills aren’t immediately obvious when entering the restaurant. It transpires they’re right at the back of the room as part of an open kitchen, but the smell is much more conspicuous; it welcomes us with an appetite whetting waft of spice stoked charcoal.

The restaurant is sleek and modern, with large, brightly coloured paintings and stone statues set as focal points against a glass-heavy backdrop and low lighting. At the kitchen, the three methods of cooking which Amaya uses can be seen, and are pointed out to us by staff. Tandoors sit alongside a sigri (open coal grill) and a tawa (a thick iron plate for griddling). Although the food served isn’t all of the usual grill variety, it will be cooked fresh to order on these Indian grills.

At Amaya, a selection of small dishes are not served at once as is typical of Indian restaurants, or in a few courses the English way, but each plate one at a time in quick succession, all acting as ‘starters’ in the run up to a larger main course of curry or biryani. Our £55 per person tasting menu is slightly modified by our waiter after he asks us what kind of food we like, and we sit back and await the onslaught.

Our first dish is minced chicken wrapped in lettuce. Though the first thing that comes to mind is that they’re not very Indian, they go down nicely, with just a little chilli poking through the tender, rich-flavoured mince.

With this first course came four shot glass size tubs of chutney condiments. There’s a damson chutney, a spicy tomato chutney, and two chunky powders which go under the guise of ‘dry chutneys’. These nut based sprinkles which can be added onto any dish in any combination, are an initially slightly strange concept, but prove to be great fun. Flavour-tripping and mixing of the sort that combines eating with school lab science ensues, and a salty peanut sprinkle is so good that we have to request a top-up.

Next up we have scallops, served in their shell in a herb sauce. They’re juicy, tender and wholly excellent, with a touch of coconut milk adding a depth of flavour as well as something tangibly Indian. Venison shish-style kebabs follow. They are served off the stick with a spicy sundried tomato stuffing, and they’re a perfect match for the damson chutney. Tandoori broccoli is next up, and in its utter simplicity is a stand-out dish. Being baked in the tandoor has made the florets slightly crispy and concentrated their ‘green’ flavour. They are served with a lightly spiced yoghurt, and of course a sprinkling or two of the ground peanuts can only help. Black pepper chicken tikka and tandoori king prawns are two more typical dishes, but each one expertly cooked, flavoured and seasoned. Six courses in and they make a perfect, if substantial, end to the round of starters.

The chicken biryani main course comes in a large cast-iron pot (especially large considering the food which has preceded it) with the lid sealed on with bread dough. Once opened, the smell of intermingling spices is intoxicating. Digging into it, each carefully assembled layer conjures different flavours. There’s no oiliness, and no stodginess – just cardamom, cumin, nigella seeds and tender chicken pieces.

The idea of pudding after such a large meal is almost humorous, but that doesn’t stop us – and they don’t do it by halves, either. A sharing platter features a lime tart, chocolate pot and ginger crme brûlée and there’s nothing there that isn’t worth the over-fullness that follows. The tart deserves special mention for its crumbly, buttery pastry, as does the accompanying Muscat dessert wine from Amaya’s extensive list which has been put together with best-selling wine writer Matthew Jukes. We enjoyed a zesty Sauvignon Blanc for around £20 with our meal, though prices go much higher. Well, it is slap bang in the middle of Knightsbridge, Chelsea and Belgravia.

Amaya is definitely one to try. Don’t expect the most authentic Indian food, because that’s not what it’s about. Just go with the flow and enjoy the fusion-led feast.