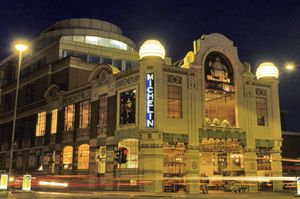 Much as the food snob in me has adopted an “I don’t do Conran” stance (they are, after all, the McD’s of the mid-range restaurant dining world), I confess to having been seduced by Bibendum. It’s almost enough to eat in the flamboyantly unique Michelin Building, formerly the headquarters of the Michelin Tyre Company. Sir Terence recognised its potential, snapping it up in the mid 1980s when it came on the market and transforming it into a restaurant, oyster bar and retail outlet.

We ate in the upstairs restaurant, a wonderfully light room from which the beautiful stained glass window can best be appreciated. Tables are well-spaced out and chairs are the sort that force you to sit back in a considerable recline. A low murmur of conversation emanates from the dinner-date couples, jewel-becrusted “Sloaney ponies” and business diners that populate this intimate dining room.

The service is effortlessly efficient but with the sort of forced courtesy that suggests they are almost looking down on you, and we noticed the discernibly warmer treatment the table next to us received, as they were obviously regulars (and big tippers, perhaps?). That aside, our meal was excellent, from the wonderful selection of fresh breads to the spot-on coffees to round it off.

I started with one of the most memorable dishes I’ve had in any restaurant, an almost vile sounding cold curried apple soup, which I ordered almost as a “if you’re gonna put something like that on the menu, it’d better be good” challenge to the kitchen. And it was. Fantastic even. Just a hint of cumin, the slight sweetness of the apple offsetting the richness of the cream, and the surprising revelation that cold soup can, very occasionally, be pulled off has immortalised this dish in my memory.

My main course was good but had a lot to live up to, and didn’t quite hit the spot in the same way. A generous fillet of pearly roast cod was sea-fresh, and we agreed that it was better than the breast of guinea fowl, which was a little too bland to form an effective centrepiece for the dish. A popular choice that is apparently a regular on the menu is deep-fried fillet of plaice with chips and tartare sauce, probably the most upmarket fish and chips you’ll find in London.

Desserts were also very good, particularly the vanilla bavarois with mixed berries, a panacotta-like dessert with a sharp coulis to cut through the richness. Lemon granita was a refreshing end to the meal, marginally too tart for a hardened sweet-tooth like me, but enjoyed by its recipient all the same.

The wine list is sublime, with a range to suit all tastes and choice of food. However, beware of the wine waiter suggesting bottles from the higher end of the range (and then giving you a snotty look when you ask the price or order a cheaper one). There is a limited range below £20, so be prepared to dig deeper into your pockets to sample anything from an Italian Soave to a Californian merlot.

Perhaps I shouldn’t tar all Conran joints with the same brush. In fact, now that I come to think of it, I wouldn’t mind going to Orrery, or Le Pont de la Tour, or Alcazar…..(subtle hints to The Bloke can never be dropped too frequently).