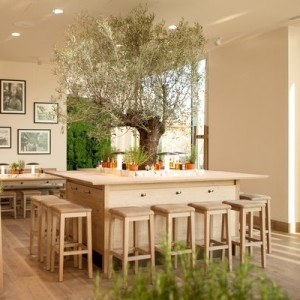 Vapiano is a German restaurant chain mainly found in Germany, but which is expanding into the rest of Europe. The Amsterdam branch is located at the front of the public library (the top floor of the library offers one of the best free views of the city) close to the Nemo Science Museum and Central station. Drinks are available on the ground floor and terrace, with food on the first floor.

As you enter the restaurant, you are given a charge card and a menu (available in Dutch, English or German). The restaurant is self-service so you pick your food counter, order your food and the server scans in your items on the card. You find your own table, and since we visited on a relatively quiet Sunday afternoon we are able to sit on wooden benches right next to the window overlooking part of Amsterdam’s attractive harbour with various old buildings plus the modern design of Nemo and other sights in easy view.

The food is low-price and Italian. Antipasti options include bruschetta for €2.75 and there is a choice of six salads ranging in price from a small mixed lettuce salad with cherry tomatoes and carrot for €3.75 to the Insalata Nizza (mixed lettuce with tuna, onion and egg) for €7.25. There is a wide range of pastas and pizzas, divided up in the menu by the price categories of €5.75, €6.75, €7.75 or €8.75. Soft drinks cost €2.00, beer and wine are available and desserts range from an Italian pastry at €1.00 to Tiramasu or Crema di Fragola (mascarpone cream with fresh strawberries) at €3.75. Specials are also available on the boards, and the kitchen area is open plan and located behind the service area allowing diners to watch as the food is prepared.

We ordered penne pasta with Bolognese sauce for €6.75, pizza salame at €5.75 and a pizza with rocket for €6.75. For the pasta, you could choose your pasta type and it was served almost instantly using a pre-prepared sauce which was however made on site. The pizzas took longer since although enough bases are ready the toppings get added as ordered, around 10 minutes before our buzzers scanned for us to collect them from the relevant counters.

The food was satisfying and the pasta sauce tasty. The pizza dough was reasonably authentic compared with those available in Italy, but although they were generous with the rocket and salami, both were also very high on the tomato-base of the topping to the point where in places it did overwhelm the other flavour. Extra drinks or dessert were available simply by going up to the counter and ordering but when the servers did come to clear our plates away they were cheerful and friendly, making no attempt to rush us out once we had finished eating.

Diners at Vapiano pay as they leave the restaurant and it was the payment that brought the most negative criticism. We had downloaded vouchers from one of the meal deal web-sites which claimed to give us half price food up to a value of €7.50 but did not include drinks. There were three of us eating and drinking but we chose to pay separately.

CTwo main courses and two drinks came to €6. When the third person paid separately however, she was told that the voucher would not be valid for her meal since the total of the food only came to €6.75 and was therefore below the minimum allowed. This bill for one pizza and a drink therefore came to €8.75. Before accepting the first payment, the till operative knew that we were together and the type of voucher we had. Despite this however, she made no attempt to correct us during the payment process or to advise that the vouchers would only be valid if we paid together and did not offer to correct this after the mistake was discovered.

The food was good and provided value for money with a great view. But our experience was somewhat spoiled by the lack of proactive customer service which did increase the price of our meal.